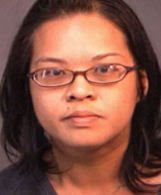 The face of evil. Too harsh? Well, listen to this: Christine Dawn Abrams, 29 yrs, abandoned her German Shepherd for two months without food or water. Ella, the dog, was locked in a metal cage in her former home and Abrams never came back to check on her. Two months? That's probably when the dead dog was discovered. It could not have lived two months without food or water. Why the abandonment? Apparently, Abrams lost her home. But, she did not have to lose her dog. Abram's logic, evidently, equated Ella with the home. Leave home, leave dog. Twisted logic, it is. However, why lock the dog up in a cage when you know she won't have a chance to live? Why not take Ella to a shelter, or offer her to a friend? There's where evilness comes in. She actually admitted to police that she knew her actions would lead to the dog's death. I am sorry. I might have misled you to think that Abrams moved to a far away place. In reality, Abrams moved only six miles away. Read more about this case here: UPDATE : December 2008 : Abrams' sentence came to eight months in the Brevard County Jail, twelve months of supervised probation jail, pay a of five thousand dollars plus the cost of the prosecution and the investigation. Then, eighty hours of community service and she can't possess animals during the period of her probation. That should have been NEVER to possess an animal again.

Anonymous said…
Oh you know this has hit a big nerve with me! I am following this case very closely and I will freak if Abrams manages to get away with it. I ALMOST jumped a plane to Florida for one of the protests! This is one of the most saddest cases that I have ever encountered. This case will remain forever on my blog. The internet is the karma of the 21st century.
7:30 AM

Anonymous said…
Oh...something else. Go to this new website www.voicesforella.org

Here you can view all the case documents which include the photos taken by the police. And I warn you - not for people with delicate constitutions. Also included are the police reports and veterinary records. It's all public record.
8:00 AM

Anonymous said…
After visiting the Voices
For Ella site (thank you, air) and reading everything there, I have to agree this woman Abrams is the face of evil. She is the poster girl for every cold blooded monster that ever walked the earth.
4:07 AM

Anonymous said…
This is so disturbing. I wish I was not imagining how that poor dog was feeling in that cage.
10:43 AM