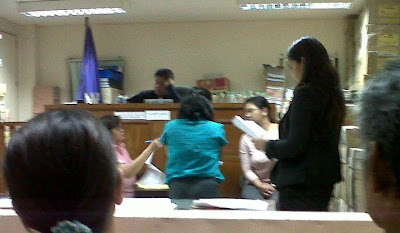 PAWS' May Felix-Razon, in pink, and Anna Cabrera, in black, at the Antipolo Hall of Justice pursuing two separate animal cruelty cases, one for dog slaughter and the other for dog fighting.
It has been a long time coming, but it is finally here. People have asked for them, complained how the law has no teeth, how animal abusers can get away with their crimes with just a small fine. Their plaintive cries have been heard and answered. At long last, improvements to the Animal Welfare Act of the Philippines, otherwise known as RA 8485, have been put forward in the form of a House Bill numbered 5849. Congresswoman Bernadette Herrera Dy sponsored the bill in the Lower House with the animal rights organizations including the Philippine Animal Welfare Society, under the legal guidance of Atty. Roy Kayaban, submitting their proposed amendments to RA8485. The proposed amendments are:
1. Increase in penalties for animal offenders, including banning of pet ownership for those convicted of pet neglect
2. Specification on who may file criminal cases under the Animal Welfare Act
3. Increased representation of AW groups in the Committee in Animal Welfare (CAW) from two to eight, plus the inclusion of a PNP representative in the CAW
4. Protection of animal rescuers from suit (administrative or criminal charges) when seizing abandoned, neglected animals
5. Protection of whistleblowers within facilities if they report violation of minimum standards of care within the said facility
6. Deputization of inspectors helping BAI monitor and gather evidence for case-building against neglectful or cruel pet owners or animal offenders
7. Pest control companies are not to treat dogs and cats as "pests". Animal control solely with City Vet unless delegated and properly guided and trained to follow law on humane catching and euthanasia.
8. Dog and cat breeders should be registered with the BAI
9. Animal disaster-relief, response and evacuation program
10. Mandatory training in humane handling of animals for all staff members of facilities with animals
11. Ban the putting of live animals in car trunks and cargo holds of buses. Provisions for carriers accepting live animals for transport. Farm animal transport should be humane
12. Private prosecutors may be authorized by public prosecutors to prosecute/help prosecute animal offenders
13. Establishment of Animal Welfare Desks in Police Stations
14. Provision of LGU temporary holding areas for animals in criminal cases for evidential purposes. Government may contract private shelters for as long as there is a funding arrangement
15. Humane standards for the physical and emotional being of working dogs - K9, seeing-eye dogs, bomb-sniffers etc
16. Creation of a budget or appropriation for the implementation of this law.
If this bill comes to fruition, that is if it becomes law, it will transform the Philippine Animal Welfare Act of 1998 into one of the strongest, not only in Asia, but anywhere for that matter. The creation of this very act in 1998 was a great first step. It broke the ice, gave rights to animals and a basis for criminal prosecution. It was like the first beer truck in the desert. In this sense alone, the Philippines has set a good example to other Asian countries. Come follow her footsteps into the animal welfare movement. In a not so common occurrence, we blazed the trail rather than follow it.
Increasingly, individual acts of cruelty towards animals have found their way into the courts for prosecution, particularly in the last two years. There is the case of Joseph Carlo Candare in 2009 who stomped to death a kitten named Teng Teng on the grounds of the University of the Philippines. Even with the shameless cuddling of the university officials, Mr. Candare couldn't escape criminal prosecution and was sentenced to community service and a fine. And recently, a man named Carlos Gozum , 55, was convicted for shooting a neighbor's Labrador Retriever. He was ordered to pay a P5,000 in fines and another P15,000 to the family for damages. Jail time hangs over his head like the sword of Democles if the penalties go unpaid. There are multiple cases in the courts today for dog-fighting (Antipolo & Cavite), for trading in dog meat, for individual acts of cruelty upon animals.
However, let's not only hope for the best. Contact your local representative and urge him/her to support this bill. If we want a more humane society, we need to strike at the very heart of evilness. This bill is on its way to putting some meat-tearing teeth to the existing animal welfare act, and perhaps by osmosis enforcement will also experience a boost, a renaissance of sorts. After all, enforcement is the right hand of legislation. What good is a law when it can't be enforced? Well, I choose to be hopeful and positive. It takes a long time to move society, but move it will.

Anonymous said…
i hope this HB will make its way to becoming a law. i really hate those people leaving their pets/animals on the streets and hi-ways - sara
6:49 AM

Unknown said…
Just been signed by Pres. Noynoy Aquino!!!!! Mabuhay ang Pilipino!!! Happiness for my furbabies too!!
10:05 AM