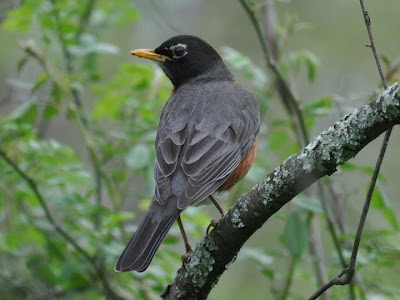 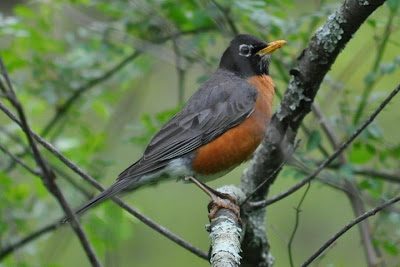 If you haven't been to Jockey Hollow in Morristown, NJ, go! The continental army camped there for three Winters in their struggle to liberate us from the British. You can see a few examples of the crude huts that were built by the American soldiers. Evidently, hundreds of these huts stood in the area surrounding what used to be Wick's farm. You can still visit the original farmhouse. The original huts do not exist anymore, but some of the original hearths are still in the ground. Life proved tough enough that during those Winters soldiers deserted en masse. Nevertheless, for all your sacrifices, dear patriots, the country is forever grateful.

Not too far from the hill where the soldiers' huts are located, I chanced upon some birds frolicking in the branches above. It was wonderful and refreshing to hear all the chirping, singing, and whistling going on up yonder. I felt that they egged me out of the malaise that consumed me that day; my pessimistic moods often get the better of me.

I trained my camera on this fellow, and clicked away before the opportunity disappeared. This Robin stood approximately 75 feet away and about 50 feet overhead. So, these long shots tested the capability of the lens in terms of clarity at extended focal lengths. I am pretty satisfied. Increasingly, my doubts about purchasing this expensive lens are being overcome. I have taken many unique photos that were simply not possible without this lens.

Catherine said…
Sounds like Jockey Hollow is a place I need to visit! Thanks for the tip.

Love all your wildlife photos.
6:21 PM

Jockey Hollow has several trails with varying lengths. I suggest you take the Yellow Trail which passes through the farm and the soldier's huts. The trail is apporx. 2.5 miles long. Start at the visitors center. The trail also takes you to the parade ground of the continental army.
7:16 AM

kahel kuting said…
nice shots. i hope my lowtech digital camera will still give justice to the photos ill be taking of beautiful nyc when i get there. not yet high time to invest on the elusive (to my wallet)yet magnificent thing called the dslr. whatever camera youre using, photos came out great!
12:34 PM

Ted Teodoro said…
I was using a Nikon D90 with a 55-300mm zoom. The D90 is considered an entry level professional camera, but in reality it is more than good enough for most people's needs. It's the photographer that matters most often than the camera.
12:38 PM

kahel kuting said…
thanks for that tip. ive always fantasized of getting myself one of those dslr but something always comes up that needs to be prioritized (coughcatscough)but yeah hopefully i can get a good deal at bestbuy.
12:54 PM

June 18, 2008
It looks like the noose is getting tighter around the neck of Dan Sy Tan , the alleged but obviously guilty ring leader of a vicious dogfighting ring in the town of Antipolo, Rizal in the Philippines. He was finally arraigned on June 5, 2008 for his crimes, illegal gambling and violating the Philippine Animal Welfare Act of 1998 . Caught redhanded by undercover cops posing as spectators, Dan Tan and his business associates face overwhelming evidence. Included in the ring are three Thai nationals who fled the country last year. They are on videotape. There are gate receipts, eye witnesses, veterinary statements, all point to their guilt. These guys made money from the blood of fighting dogs. What a way to make a living! It's been a full year since the night of the raid, but we'll take every bit of victory we can get. I say " We " because I am a member of the Philippine Animal Welfare Society (PAWS) who worked with the police to capture these poor excuses for human be
Post a Comment
Read more