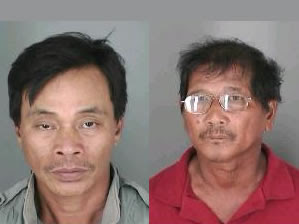 Two men from Hawaii were indicted for stealing and butchering an 8-month old German Shepherd belonging to Frank and Debbie Manuma, pictured below with their dog. Recent changes in animal cruelty laws have made this crime a felony punishable by five years imprisonment plus a $10,000 fine. And as far as I am concerned, I will hope and pray that these guys get the maximum. The charges are second-degree theft and first-degree cruelty to animals. Circuit Judge Steven Alm issued $20,000 bench warrants for both defendants namely Saturnino Palting, 48, pictured on the right, and Nelson Domingo, 53, left, both of Kalihi, Hawaii. For those unfamiliar with bench warrants, they are issued by a judge for an individual deemed to be in contempt of court as a result of that person's failure to appear at the appointed time and date for a mandated court appearance.

When I first saw the headline, red flags immediately went up in my mind. Could it be that the dog meat trade, or that most vile practice of slaughtering dogs for Pulutan ( finger food for drinking binges ) had somehow crossed the Pacific Ocean and reared its ugly head in Hawaii? Much to my disappoinment, as I read on, I learned that the men were originally from the Philippines.

Palting and Domingo worked , before they were fired as a result of their actions, at the Moanalua Golf Club. Frank Manuma, the dog's owner, arrived at the club on Dec. 16 to play a round of golf. He asked the management's permission to keep the dog, Caddy, at the equipment shack while he played. By the time Frank Manuma finished his game, Caddy was gone. Witnesses told the manager that they saw both maintenance workers, Palting and Domingo, load the dog into their vehicle at the end of their shifts. When questioned, Palting and Domingo initially said the the dog ran away. 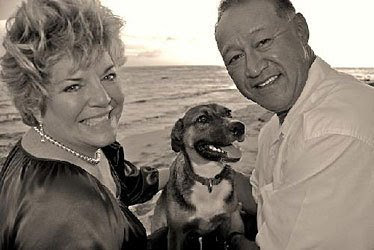 When the police got involved, both men confessed to butchering and eating the dog. Another man, who is also a golf course employee and who had the day off, told police that Palting and Domingo brought the dog to his house where they killed and butchered it.

Both Saturnino Palting and Nelson Domingo have no prior records. As of yesterday, they have not turned themselves in. The police consider them flight risks. Close family ties could lead some people to assist them in an escape effort, if they are so inclined. For that, let's put our trust in a sense of fairness and propriety that is instilled in most Filipinos.

I am perplexed at how the third man was not indicted as well. It would be impossible for him not to know about the killing and the butchering of a dog in his property. He allowed it and, most likely, participated in it too.

Here is a good example at how the dog meat trade, or the practice of eating dogs among some Filipino macho men, goes beyond the killing of innocent and trusting dogs. This practice also butchers our image as a race and as a nation. Individuals like these dog-eaters smear our reputation to no end. Do Filipinos eat dogs? Most of the world will ask this question in a state of incredulity. Because of people like Palting and Domingo, we'll have to admit that some do, but most of us don't.

Reading the various reports on the web can lead people to think that Caddy was slaughtered for food. They give the wrong impression. In truth, as I have previously mentioned, dogs are slaughtered to become finger food for a drinking session among the men folk. Almost always, slaughtered dogs do not address a need for food, but a need to be macho among drinking buddies. As if slaughtering a dog and serving it to their buddies means that they've gone an extra mile to please them. That's one angle that the police might not have considered. The killing wasn't for life-giving food, but for fun. All I am saying is not to portray these men as people in search of sustenance. They should have just bought a bag of nachos to go along with their get-together. What a shame.

I will be sending a tip to the Philippine National Police at their feedback page about the possible arrival of these two at the international airport, in case they have hightailed it out of Hawaii and headed for home.

UPDATE : According to the Honolulu Advertiser, the two men were arrested at their homes last Tuesday night. They are now in police custody.

September 08, 2009
Here's a dog I want you to meet, Simba. He's an energetic little fellow who literally leaps in joy when it's time for a walk. I mean, Simba leaps vertically like he's on a pogo stick. He's very amusing. Simba was rescued from a pound down in West Virginia, and he's now with us in northern New Jersey. I love small dogs, and he's become my most recent favorite. Simba certainly qualifies as a lap dog. Last Sunday, after walking him, we sat in our patio area at the shelter and I gave him tummy rubs and back massages while he laid like a pillow on my lap. I've been told that Simba doesn't like having a collar put around his neck, and so he wears a harness instead. Interestingly, Simba is microchipped. So, he belonged to someone who cared for him. He's a good boy and only two years old. All predict that Simba will get adopted quickly, like most toy dogs do.

April 24, 2009
Cross-posting a message from the Brooklyn Animal Foster Network

Please join us as we voice our opposition to continuing the City contract with Animal Care & Control (ACC) unless the disinterested and inexperienced Board of Directors including Executive Director, Charlene Pedrolie are replaced with forward thinking, humane shelter professionals and animal rights advocates!Attention everyone who cares about the hideous numbers of animals being killed in our shelters.

Please sign the petition below so that we can put an end to AC&C's dismal record of mistakes and animals killed for want of a home. Send letters to the Board members (info below) protesting their failure to closely monitor and oversee what is happening in our shelters and for their failure to hire someone who can implement the mandate of a NO KILL NEW YORK!

New York City's taxpayers and the animals in our shelters deserve nothing but the best: experienced, conce…
1 comment
Read more

February 18, 2009
Because I belong to an group of animal welfare advocates in the Philippines, I can read the numerous discussions between group members and people who, seems to me, just signed up to make an urgent plea for help. There were two this week who begged for assistance concerning two dogs who were tied up under rain and sun with no food nor water. One was described to be on the verge of a heat stroke. The images that filled my mind disturbed me immensely, but I am also encouraged at the same time.

There is a growing number of animal welfare advocates in the Philippines and ordinary citizens are beginning to reject animal cruelty, willing to take personal action against it. Just from this website, I can see from the visitor data that many are seeking information on how to report animal cruelty in the Philippines. You can find my previous post on the subject HERE.

Keep in mind that your complaint has legal standing via the Philippine Animal Welfare Act which is also known as the RA 8485. This …
56 comments
Read more