Chlorine and Dolphins, A Deadly Encounter 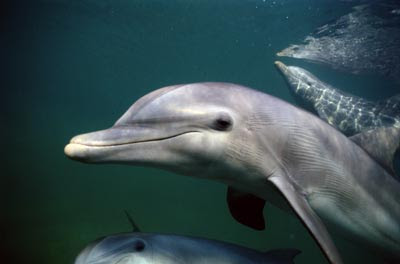 In the first place, what is Chlorine? It is part of the halogen group of elements that is known to be salt-forming. Its symbol is CL, atomic number 17, and its atomic weight is 35.45. You will not find Chlorine in a free state ( by itself ) in nature but always compounded with other elements like Sodium. It is extracted by electrolysis. Chlorine is described as a greenish-yellow gas, and it can be compounded with nearly all the other elements. We are warned that Chlorine is a respiratory irritant, irritating the mucus membranes and its liquid form burns the skin. Its good use includes, ironically, making safe drinking water. But, it is also used in many household products like paper, textiles, medicines, antiseptics, and plastics. However, Chlorine is most commonly used for sanitation, bleaching and disinfectants. In history, Chlorine was used as poison gas during World War One. So, what we have here is a pretty nifty agent of nature, protean in function and chameleon-like in form.

Chlorinated water is harmful to dolphins. Some have asserted that this is only postulated, and it lacks the necessary scientific testing to make it an empirical truth. Well, don't take my word for it since my background is in literature and history but I'd like you to consider the work of Jason Dombrosky, caretaker of the dolphins at the West Edmonton Mall - Dolphin Lagoon, Edmonton, Alberta, Canada. Yes, Dombrosky works at a waterpark, and that puts him on the other side of the conflict between animal welfare advocates like us and profit-driven businesses. However, Dombrosky was conscientious enough to seek a better world, through study and experimentation, for his dolphins particularly when it came to their watery habitat, short of setting them free. It is ironic that from the work of an insider we can prove beyond doubt how harmful and cruel the lives of captive dolphins are. By the way, all five dolphins at the West Edmonton Mall died and they have stopped forcing dolphins to perform.

For those of you who would rather not wade through the technicalities, I am extracting pertinent material from the above for easy digestion. This first quote tell us about the problem with Chlorine:
" The use of chlorine on Atlantic Bottlenose dolphins also presents problems that extent beyond carcinogenic by-products. Exposure to chlorine and chlorinated by-products is quite simply unnatural for marine mammals. The deviance from a naturalistic environment begins with the pH variation from the ocean to the artificial enclosure. Most marine mammal facilities maintain a pH between 7.6 and 7.8, while the ocean pH is much greater at 8.3. Work done by Herman and Tavolga (1980) found that the chlorination of water interferes with aspects of dolphin communication (qtd in Toom 1987). Dolphins have shown to secrete signal substances, or pheromones, that play a role in social and sexual behavior (Toom 1987). Undoubtedly chlorine would act on the substances resulting in their destruction. Dolphins, as many other marine mammals are versatile and adapt to chlorinated water systems, but there appears to be sufficient evidence that long-term exposure would lead to negative health effects. "
UV irradiation brings good changes:
" The improvements seen in the Atlantic Bottlenose dolphins through the implementation period up until the present has been nothing short of extraordinary. Over time, the dolphin's skin had gradually become bleached out by the use of sodium hypochlorite. Continual sloughing and large white skin blotches had become the norm. Eye problems continually plagued the dolphins, often making it impossible to see their trainers due to a thin protective coating covering the cornea. Within the first week of UV implementation, the eye problems disappeared, and their skin began to darken. Even at the writing of this paper, the skin continues to improve. Skin sloughing has slowed dramatically, and the incidence of rubbing behaviors has decreased. "
Removal of Chlorine improves respiratory problems :
" Both dolphins have had documented respiratory irritations in the past, most notably the male. He would cycle through bouts of respiratory inflammation every 2 to 4 weeks, occasionally needing antibiotic treatment. Since the removal of chlorine, he has not had a respiratory flare-up. The female was continually plagued by bronchial inflammation. This irritation would lead to the formation of a raw patch behind her blowhole. The condition was documented through examining slides produced by respiratory samples. Since the removal of chlorine, respiratory samples have shown vast improvement."
Dolphins drink less with Chlorine:
While it is postulated that Atlantic Bottlenose Dolphins attain 69% of their hydration demands through the drinking and/or absorption of seawater (Dierauf and Gulland, 2001), the dolphins prior to the removal of chlorine were never seen drinking the water. Furthermore, during times when they went of off feed, they dehydrated to a critical point within 24 hours. Since the removal of residual chlorination, the dolphins are often seen taking in mouthfuls of water, and using the water in a variety of ways."
Dolphins are stressed with Chlorine:
" The removal of residual disinfection in the form of chlorine has removed the element of environmental unrest in the dolphins’ water system. The consistency attained with the use of UV has allowed changes to be made in the water quality from a proactive state rather than reactive. Issues of chlorine demand, and the resultant cloudiness of the water that comes with it no longer exist. Consistency is a key with environmental quality, and it is no longer jeopardized due to the removal of chemical alteration to the water system. As animal caretakers it is important to provide the dolphins with the least amount of environmental stress possible, with the advent of UV water treatment, the water system takes on a whole new naturalistic appeal. "
Do not patronize or cooperate with dolphin shows at all.

March 15, 2008
No, this is not about Eliot Spitzer and his prostitute. It's about the wife of the incoming Governor of New York State, Michelle Paige Paterson who showed up wearing what looks to be a real fur coat. Was that an attempt at elegance? It didn't work, repulsive. Was that meant to make you look classy? Sorry, but wearing the skin and fur of dead animal is hideous. The lady is either ignorant or arrogant, or both. Mrs. Paterson, obviously, needs to hire advisers if she's going to live under a political spotlight. At the very least, she must be aware that there is great controversy over fur coats and so this is a slap on the face for animal welfare advocates. I don't think that Mrs. Paterson is uninformed at all. The disgrace continues after Spitzer. Here is PETA's reaction : Dear Mrs. Paterson, I hope that this finds you well. As you may know, PETA is the largest animal rights organization in the world, with more than 1.8 million members and supporters dedicated to the
12 comments
Read more